In memory of Abdullah Baqweer

In memory of Abdullah Baqweer (died on the 30st of October 2008) translated into Arabic and published in both languages, English and Arabic, in Al Watan newspaper, one of the two major newspapers in the Sultanate of Oman. It has also been posted on the Dhofar University students webpage on facebook: 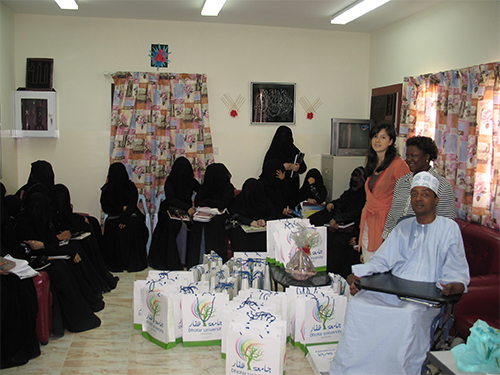 “My name is Annemarie Profanter, I am an assistant professor at the Free University of Bozen-Bolzano in Italy and was a visiting professor in Salalah in 2006. I am deeply shocked to hear this sad news about the death of my ex-student Adullah Baqweer. Thank you very much for giving me a chance to hear that my friend and esteemed student has left this world and moved on to another world. Literally I can see him having moved on, finally being able to move freely without the limitation his body posed on him. His spirit was always moving, though he had such a hard time even turning the pages of a book, his wide open eyes just reflected his inner openness. It is hard to describe the picture which confronts my eyes of this lovely human being: he sits in my class, laughs at me, smiles, encourages all the other students to talk, to listen, to study – and I honestly have to say, he even encouraged me, not to give up, to smile, to share ideas and theories even though they seemed not to be appreciated much. He did this by not only smiling but laughing and bending his whole body. He showed me there is so much to enjoy: the presence of human beings who are open and willing, who want to make a difference. This joint effort for a change was worth fighting for, yet in the battle, holding onto the beauty of life and kindness. Abdullah was the most courageous young Omani man I have met and he has enriched my life tremendously. I don’t think he had any idea how much he inspired me, and how he opened my eyes to see the issues with which those challenged by the circumstances in their lives struggle day by day. In the meanwhile, we complain about minor issues and think life is not fair to us for reasons that are not worth the worry given the fact that there is so much to appreciate. The article which he inspired me to write was promptly accepted by an international journal of social psychology which was again a proof of how much the world wants to know what is going on in
Oman, what the problems and needs of physically challenged people are there and how they cope. I hope that he knew that this article was accepted and highly appreciated by the editors. Just the other day I thought that I would send him a copy of the journal as soon as it was published. Unfortunately he did not have a chance to read it ever. This makes me very sad, I would have loved to have seen how happy this would have made him and that he actually would have felt how deeply he had touched my spirit.I thought of a way, another way, to let him and his family and the society as a whole know all this. I wanted to address this in a newspaper article which would be published in Arabic for the people in Oman to know, that his wings reached out to Europe and beyond even though his legs were not be able to get him very far. He showed us that it is a matter of will and determination, of dedication to the issues that you worry about most, that most touches your soul – that’s what Abdullah showed us: there always is a way and you should never give up searching for it.
Abdullah’s spirit was young, enthusiastic, courageous, loving, and caring – even in minor issues his kindness was shown again and again: he gave me the precious creams and frankincense his mother makes, he offered me to drink and to drive me here and there when I had no means of transportation. He was so excited when the library ship was stationed in the harbor of Salalah and on a Sunday evening we went there just enjoying looking at the numerous colorful books, we took pictures and let the wind stroke our cheeks. These are only some memories… 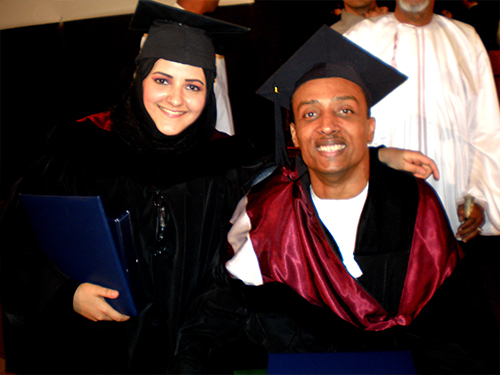 I thought, one day I would have a chance to fly back to Salalah to visit. And of course, I also thought about the happy moment when I would meet Abdullah again. But I never thought that he would not be there anymore. This is what we keep forgetting. Life is not there to be taken for granted, but to be appreciated and thanked for every morning of our lives. 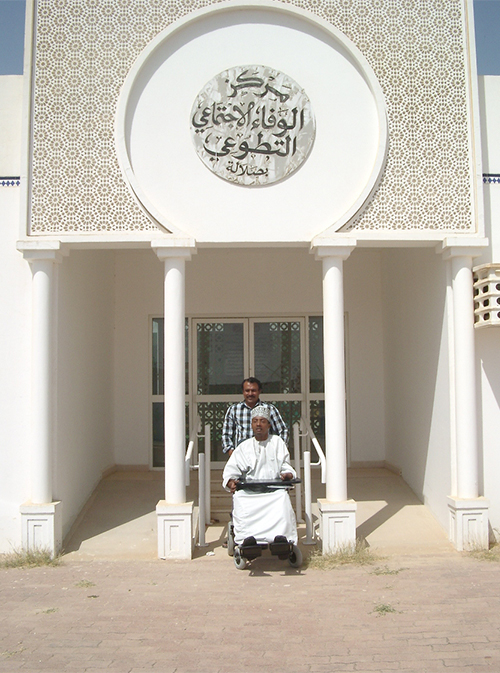 Abdullah was so determined to be all that he could be and fought hard to be where he was. God let him be an inspiration to so many, not just to me but to so many others. In his way the ripples he set in motion in the pond with his pebble is perhaps way larger than he ever thought it would be. God sends such amazing people into our lives to inspire and uplift us. Thank you Abdullah for your loving way – I am thankful and humble that I had the honor of getting to know you and spending some of your precious time with you!