A documentary by Annemarie Profanter and Stephanie Ryan Cate in cooperation with Arda Nederveen.

The film “Polygyny in Oman: Forms and Changes of this societal and cultural marital arrangement” was being shot in the Sultanate of Oman in February/March of 2011.
The intent behind the film was to offer a glimpse into daily life in the Sultanate for those people living in polygynous marriages or families in order to allow people to see the similarities amongst all forms of families presented and also to demystify what in the West is an uncommon marital form. This film addresses this lack by explaining in intimate and vulnerable language some of the divergent cultural practices which can antagonize and alienate European neighbors and colleagues.
In collaboration with American Research Fellow Stephanie Ryan Cate from the University of Alabama Huntsville (USA)  and a filmmaker Ms. Arda Nederveen, Visuele Producties, Netherlands, I realized a film trip to Oman from the 26th of February to the 12th of March 2010 building on the connection established during my work as professor at Dhofar University in 2006. The intimacy afforded by being in their homes and spaces allowed a greater openness to the questions regarding their daily lives and lifestyles. 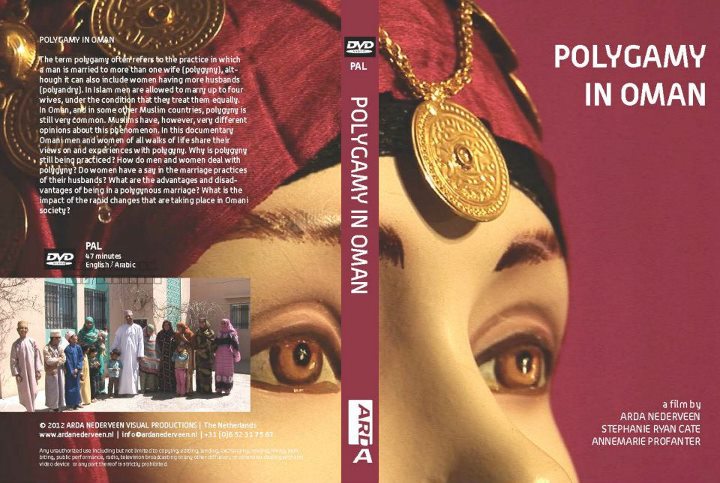 Islamic Traditions in Times of Globalization
This film shows Arabian Gulf Islamic polygyny from an insider’s view with wives, children and husbands providing unique perspectives. This is a glimpse into an age old lifestyle and the reasons for its continuity and its effects on immigrants living in the province.
Polygny as practiced in many Islamic states is recorded in the Qur’an as limited to 1 male and as many as 4 females at any time and dependent upon one’s ability to provide for, be just to and care for your wives. “Marry women of your choice, two, or three or four; but if ye fear, that ye shall not be able to deal justly [with them], then only one…” (The Holy Qur’an, English translation by Yusuf 1983: Sura IV, Verse 3).  In the Arabian Gulf as well as Northern Africa polygyny exists today as a viable marital choice and familial standard. There are many social stresses relating to marriage in general, i.e.: the need for females to be married -in order to procreate and be taken care of, to solidify tribal relations, and to take care of extended family members. These all relate to polygyny as well and might be valid arguments for our Muslim immigrants to date.
Gender roles are reflected in family and work situations and highlight the changes that are occurring due to globalization factors such as world media, internet and telecommunication. Due to the changing state of women’s education and the current economic climate there exist stressors today that were not present as little as 20 years ago. Women from the mountain and coastal villages remain fairly inured to the practice and in many cases continue to support it; whereas, those from urban families often have more difficulty validating it. Nomadic and pastoral families often require many hands to feed the extended family and to deal with all of the minutiae of daily life. In the cities, the environment requires fewer hands to accomplish many of the same tasks. By talking with and viewing these people’s lives an opportunity for dialogue emerges that reflects respect for the diverse social customs in this and other parts of the world.